View Album
Get your own
Chase and Lauren's Christmas parties at Walnut Street Baptist Church Daycare.
Posted by Unknown at 7:41 PM No comments:

View Album
Get your own
Posted by Unknown at 7:36 PM No comments:

I Vote for the Red Wolves

Because the NCAA decided to ban "hostile and abusive" mascots from its ranks instead of fixing the BCS Bowl mess, Arkansas State must change its mascot, the Indians. The favorite name for a lot of fans has been the Red Wolf. Now, the very thought of sitting in Indian Stadium and not hearing the Fight Song or Cherokee has been a tough pill to swallow for this diehard Indian fan.

On the way home the other night, I went through all of the phases of mourning for the Indians and I was ready for a new mascot by the time I stepped out of the truck. I thought the Red Wolves sucked the least of the 12 names the mascot committee selected. I didn't think much of it until my 2 year old and I made an afternoon outing to the Crowley's Ridge Nature Center. They have a mounted red wolf. They were indigenous to Region 8 until about 100 years ago. When you hit a button, you can hear a pack of red wolves howl. It sent chills up and down my spine. It was at that second I decided that we have to become the RED WOLVES!
Posted by Unknown at 10:55 PM 2 comments: 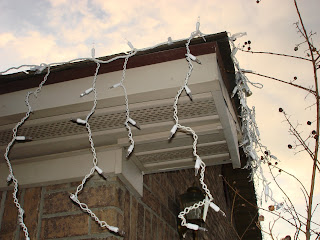 There's nothing like hanging Christmas lights on the house when it's 35 degrees to get you in the holiday spirit! I've decided to make the Friday after Thanksgiving as the day to put up the tree and lights. I think the rest of the guys on our street are mad at me. I saw several of them drive by and give me dirty looks. Their wives will make them put up lights tomorrow....
Posted by Unknown at 4:05 PM No comments: 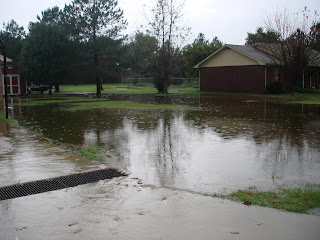 It came one heck of a rain recently at the house. I didn't know it, but my son decided to dam up the small ditch in front of the house. He nearly flooded the entire neighborhood! He used a couple of 2x6's to block the water from going under the driveway.
Posted by Unknown at 8:18 PM No comments:

Pictures and Video from Viewers Help Us Cover Downtown Fire

We received a number of pictures and video from either digital cameras or cell phones as a fire raged in downtown Jonesboro Thursday afternoon. It's amazing how the world is getting smaller and anyone can help cover a story when all you have to do is hold up your phone and click a button. BTW - this picture was taken by James Oliver and David Smith.
Posted by Unknown at 9:52 PM No comments: